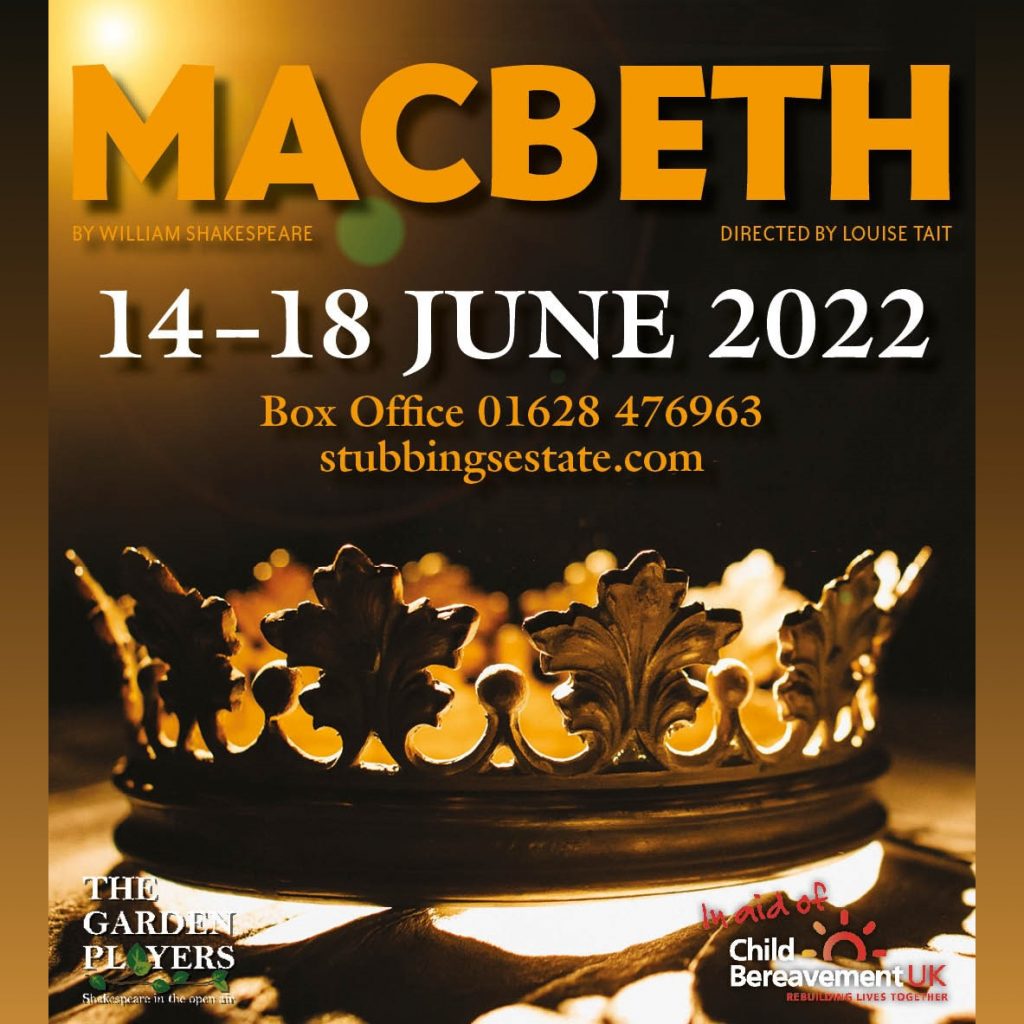 ‘That which hath made them drunk hath made me bold: What hath quenched them hath given me fire.’

Stubbings are very pleased to be welcoming back The Garden Players in June 2022 for five open air performances of Shakespeare’s tragic masterpiece, directed by Louise Tait.

Following acclaimed performances in 2013, 2014 and 2015, five completely sold out performances of A Midsummer Night’s Dream in 2017, The Tempest in 2019 and The Merry Wives of Windsor in 2021, The Garden Players return in 2022 with an exciting new production of one of Shakespeare’s finest plays.

Shakespeare’s great tragedy tells of ambition and guilt amidst a background of regicide, violence and the supernatural. When a trio of witches tells returning hero warrior Macbeth that he is fated to become King of Scotland, he attempts to forge his own destiny. Aided and encouraged by his wife, he embarks on a guilt-ridden reign of terror.

See here for reviews of past shows.

This event will be held within the private grounds of the main house. The performance is in the open air with the audience area under cover in raised seating. 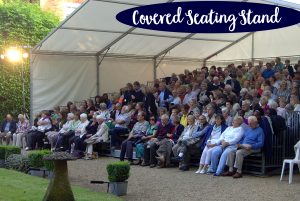 The gate to the lawns will open from 5.30pm for picnicking, with the play commencing at 7.30pm. There will be a 20 minute interval on each night.

Alcoholic beverage and hot/cold drinks will be available to purchase from the bar on the lawns.

Each year all proceeds of The Garden Players’ production are donated to charity. This year they are supporting Child Bereavement UK:-

Child Bereavement UK is a national charity based near Beaconsfield which supports parents and children when there is a bereavement in their family.

£20.00 per person (Concession available (£16.00) for the Tuesday, Wednesday and Thursday performances only, available to senior citizens, students and children under 16 years old.)

Ticket purchases and enquiries for this event can be made via The Garden Players box office here.

For more information and any further enquiries please contact The Garden Players direct, either through their website, by telephone on 01628 476963, or by email.

How To Find Us

Our Venues For Hire

Bring your garden to life with our great range of

We have lots of lovely, fragrant lavender - loved

What better way to round off the day than with som

What are you looking for?

We use cookies on our website to give you the most relevant experience by remembering your preferences and repeat visits. By clicking “Accept All”, you consent to the use of ALL the cookies. However, you may visit "Cookie Settings" to provide a controlled consent.
Cookie SettingsAccept All
Manage consent

This website uses cookies to improve your experience while you navigate through the website. Out of these, the cookies that are categorized as necessary are stored on your browser as they are essential for the working of basic functionalities of the website. We also use third-party cookies that help us analyze and understand how you use this website. These cookies will be stored in your browser only with your consent. You also have the option to opt-out of these cookies. But opting out of some of these cookies may affect your browsing experience.
Necessary Always Enabled
Necessary cookies are absolutely essential for the website to function properly. These cookies ensure basic functionalities and security features of the website, anonymously.
Functional
Functional cookies help to perform certain functionalities like sharing the content of the website on social media platforms, collect feedbacks, and other third-party features.
Performance
Performance cookies are used to understand and analyze the key performance indexes of the website which helps in delivering a better user experience for the visitors.
Analytics
Analytical cookies are used to understand how visitors interact with the website. These cookies help provide information on metrics the number of visitors, bounce rate, traffic source, etc.
Advertisement
Advertisement cookies are used to provide visitors with relevant ads and marketing campaigns. These cookies track visitors across websites and collect information to provide customized ads.
Others
Other uncategorized cookies are those that are being analyzed and have not been classified into a category as yet.
SAVE & ACCEPT